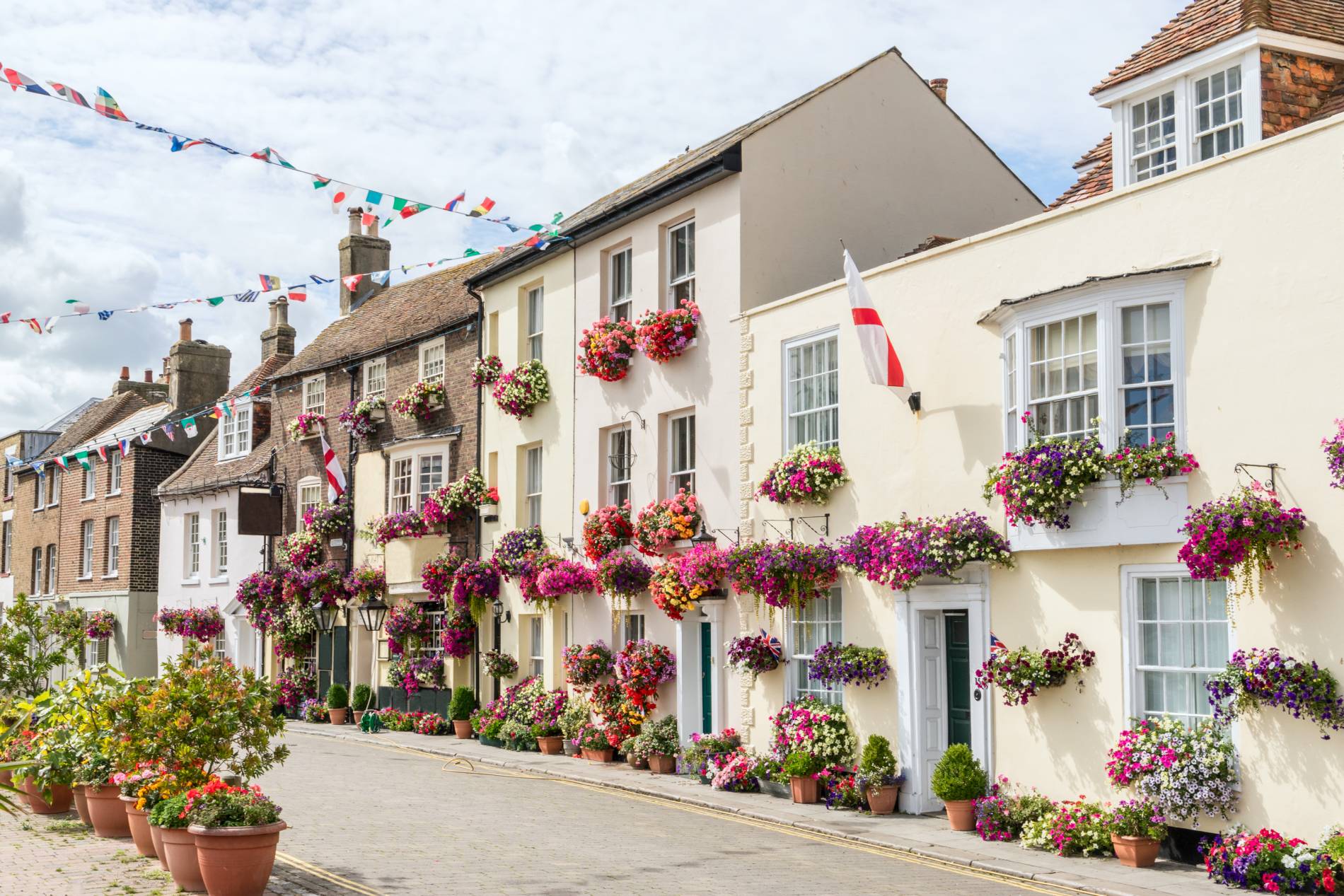 There are so many things to do in Deal, Kent! And if you’re looking for places to visit in Kent or things to do near Canterbury look no further!

Arriving in Deal by train couldn’t be simpler. From the station it’s a short walk down Queen Street which leads into Broad Street. Then, at the bottom, the sea and Deal Seafront are spread out before you! Or you could easily drive. It’s a 45 minute journey from Yorke Lodge via the A2 and A258. Plus there’s plenty of pay and display parking in Deal. Deal is therefore a definite must for things to do near Canterbury!

For railway travellers trains go from Canterbury East. This is a 20 minute walk from Yorke Lodge. You have to change at Dover Priory, but the whole train journey is only 40 minutes. Deal is a small town and everything is within walking distance. The train is thus ideal. However, things to do in Deal include exploring the High Street’s shops. Not to mention a whole array of other unique shops not on the High Street! So you may decide the car is best for transporting your purchases!

Deal Castle was built by Henry VIII. It was one of three fortresses constructed by Henry along this bit of coast line. They were built to ward off the threat of invasion from Catholic Europe. This never happened so they must have worked! Deal Castle is the largest of the three and has changed little over the centuries. Deal Castle is on Prince of Wales Terrace towards the southern end of Deal Seafront.

It’s worth noting that Henry VIII had grounds for his concerns. Long before Deal Castle was built an invading force had landed at Deal. It was around 55BC and the man responsible was Julius Caesar. So you see can’t be too careful when planning your Tudor defences!

Continue walking down Deal Seafront with Deal Castle behind you on the right. Before long you will see the Deal Memorial Bandstand. This was opened on 2nd May 1993. It stands on Walmer Green as a poignant and fitting “living memorial”. It was built in remembrance of eleven members of the Band of the Royal Marines School of Music. They were killed by an IRA bomb on 22nd September 1989.

The Memorial Bandstand is a dodecagon. Or a 12 sided polygon. On eleven of the side panels is the name of each Royal Marine who was killed. The entrance to the bandstand is on the remaining side. During the summer free concerts are held here. Walmer Green is a relaxing place to have a picnic while listening to the bands.

3. The Former Royal Marines Barracks and School of Music

The Royal Marines Barrack and School of Music have been converted in to residential housing. The Georgian character of the buildings has, however, been preserved. The magnificent facade of the barracks can be admired from the Strand. The Strand is also home to a variety of shops and cafes. But it’s technically in Walmer!

As we’ve strayed into Walmer we can’t leave without a quick mention for Walmer Castle. It is, after all, one of the top places to visit in Kent. It is another of the three fortresses built by Henry VIII. But unlike Deal Castle Walmer Castle has evolved into a home. It is the official residence of the Lord Warden of the Cinque Ports. The principle rooms and the gardens are open to the public.

5. Things to do in Deal, Kent – Cycle Routes

Walmer Castle is about a 30 minute walk from Deal Castle. But there’s a lot to see on the way! And not just the Memorial Bandstand and former barracks. The Lifeboat House, beach huts and Sailing Club line the route. Also the ever changing panorama out to sea – including France! However, if you don’t feel like walking you could always hire a bicycle!

There are both local and National Cycle Routes. These head north towards Sandwich and beyond. And south past Walmer towards Dover. By cycling you will find many other places to visit in Kent. And many other ways to spend days out in Kent.

Bicycles can be hired from Mike’s Bikes next to Deal train station.

From the southernmost extreme of things to do in Deal to the northernmost! In other words from Walmer Castle via Deal Castle to Sandown Castle. This is the third of Henry VIII’s three castles built to repel Catholic invaders. Sadly all that remains today are the castle’s ruins. However, these have been incorporated into the town’s sea defences. So even the castle’s ruins are still offering protection against invasion from the sea! The castle grounds are now a community garden open to all.

Right in the middle of Deal Seafront is the pier. The first pier was a wooden structure built in1838. It was destroyed in a gale in 1857. A new pier, made from iron, opened in 1864. But in January 1940 a mined Dutch ship hit the pier, causing extensive damage. The pier today is 1,026 feet long and is constructed from concrete-clad steel. It was opened on 19th November 1957 by the Duke of Edinburgh. There is a cafe at the end of the pier. Deal pier is also a popular place for fishing.

Looking back from along the pier you get a magnificent view of Deal Seafront. And there are loads of things to do in Deal on Deal Seafront alone!!

Running parallel to the Promenade is the main coast road gloriously named Beach Street! Because the beach is just there! Many of the houses along Beach Street are Georgian. There are also lots of little lanes running down from Deal Seafront towards Middle Street. The Royal Hotel is between Beach Street and the beach. Lord Nelson and Lady Hamilton visited the Royal Hotel in 1801. Perhaps they were looking for things to do near Canterbury?!

Not far from Deal Castle are fishing boats pulled up on to the beach. After a particularly good catch fresh fish can be found for sale here. There are also little blackboards advertising boat trips. But we can’t leave Deal Seafront without mentioning its shelters. These are iconic but it’s hard to discover their origins! They are Art Deco in style and appear to have been erected in the 1950s.

But, wait, there’s still more to say about Deal Seafront! There are cafes, restaurants, pubs, fish and chip shops and tea rooms. Independent shops, like the Farsi Collection Boutique selling quirky original clothes. Or Pandora’s Box with its promise of “magical seaside gifts”. Just take a stroll down Deal Seafront to find out more…

The Time Ball Tower is a Grade II listed building on Deal Seafront. It is believed to be one of fewer than six remaining working Time Ball Towers. Once upon a time there were numerous time ball towers throughout the world’s shipping lanes. Ships relied upon them for an accurate time check. The time balls would fall at precisely 1pm every day. The Time Ball Museum is a fascinating insight into the history of local shipping. And also the development of navigational technology at sea. When the museum is open the time ball is raised every hour.

The Old Town is packed full of charm and even some intrigue! In addition to the Deal Seafront shops the High Street has more independently owned shops. These include boutiques, gift shops, food shops, vintage and antique shops. This vibrant area is also home to delightful cafes and other tempting eateries.

The undercroft at the historic Town Hall houses the Tourist Information Office. Deal’s town motto is “Adjuvate Advenas” or Befriend the Stranger. And never has a stranger been better befriended than here! Extremely welcoming, extremely friendly and extremely helpful. No matter that enquiries regarding the “Art Deco” shelters could not be answered!

There are three weekly markets in Deal as well as a monthly Farmer’s market. The weekly markets take place every Wednesday, Friday and Saturday. The smaller Wednesday and Friday markets are held at the Town Hall from 9am-pm. The larger Saturday market is at the Union Road car park from 8am-3pm.

The Farmer’s Market is on Stanhope Road. It’s on the first Saturday of every month from 9.30am-1pm.

12. Middle Street in the Old Town

We have already alluded to Middle Street and to intrigue. Well here the two meet! Smuggling became rife in Deal from the mid 1700s! Deal’s seafaring population was naturally adept at boat building, sailing and fishing. But smuggling was a far more lucrative occupation than fishing. So they put to sea in their boats to catch greater prizes! And Middle Street was at the centre of it all! Many of the houses here still have secret hiding places and old tunnels.

Eighteenth Century Middle Street was a den of iniquity. Smugglers and press gangs rubbed shoulders with prostitutes and murderers. But the authorities were powerless to stop the trade in smuggled goods… Nowadays Middle Street is a quiet, pretty road with fine Georgian cottages on either side. A far cry from it’s 18th and 19th Century notoriety!

The museum building itself has a varied history! Originally an industrial building it has been a bicycle store, workshop and garage. It is deep in the heart of Deal’s Old Town on George’s Road. And it gives visitors a chance to explore Deal’s rich maritime history in depth. There is also a wealth of local history on display. From full sized boats to model boats, local art to locally discovered artefacts.

There is an exhibition dedicated to the Royal Marines. Also one telling the story of the local coal mining industry. Oh, and we mustn’t forget smuggling!!

This is a guided walk around Deal. It features blue plaques to many of the town’s well-known residents. And also to significant figures who came to Deal to write, paint, compose or simply repose! You can pick up a leaflet from the Tourist Information Office. This will guide you around the 16 plaques and memorials. The walk takes about an hour. But there are plenty of places to stop for refreshments on the way!

All of the above things to do in Deal is walkable from Deal Station. Or bikeable if you don’t fancy the half hour walk to Walmer Castle! But if you do decide to walk there, do it at the end of your visit to Deal. Walmer Station is on the same line as Deal. So you can always catch the train back from there. The Deal Tourist Information Office is a great source of local knowledge. Their “Visitors Guide to Deal Kent” is full of information and things to do in Deal. It also has a couple of handy maps at the back.

So just to recap for days out in Kent and for places to visit in Kent Deal has it all! Also for things to do near Canterbury it’s the perfect seaside retreat!

Up to 25% discount with our unique Promo Codes